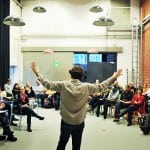 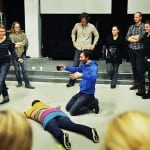 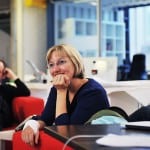 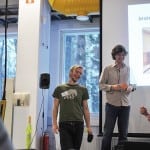 The event kicked off on Thursday 13th December by an introduction to Design Thinking –method which is used by some of the most regocnized international design enterprises, such as Ideo. Campers worked in pairs with the task of redesigning each others’ gift giving process in just a few hours. Design Thinking is  an empathy driven process where the focus is on the needs of the user and finding those needs by interviewing.

On Friday teams were formed. Those with an initial idea, were given a chance to pitch them to the rest of the group and recruit members to the team in a trade show. There were 10 groups in total and each were given a coach to help them in the working process. On Saturday teams went out on the field to interview potential users in order to find their needs. Results were used to find a point of view for the project. In the course of the afternoon the groups were then brainstorming for potential solutions and building prototypes.

The event was concluded with a jury and a pitching competition by using the means of absurd theatre. The jury included Wili Miettinen, Maija Itkonen, Aape Pohjavirta and Juho Lindman. ”It is extremely important in Finland new kinds of start up scenes are being born. This media orientated I have now experienced is a great example of that”, Pohjavirta commented.

The BootCamp received excited and positive feed back from campers and coaches. One of the main goals of the event was to bring people interested in developing journalism and media innovations together. BootCamp was a chance to meet new people and learn a new methodology and tool set to help unlock the potential in them and help them in future entrepreneurial endeavors.

”I am very impressed with them and confident in the future of journalism in Finland! They are inspiring innovators, and I look forward to seeing the innovations they produce”, Ferrell said after the camp. Ferrell is the leader of a new fellowships program at Stanford Design School and prior to that he worked at theWashington Post as the director of digital, mobile & new  product design.

Uutisraivaaja BootCamp was a pilot experiment. Based on the positive feed back a similar event would be appreciated in the future.

Uutisraivaaja is an innovation contest organized by the Helsingin Sanomat Foundation. The contest seeks ideas for renewing distribution of information and creating sustainable business models for journalism. The main prize is 250 000 euros and the deadline for the applications is January 17, 2013. Apply online here: www.uutisraivaaja.fi/home